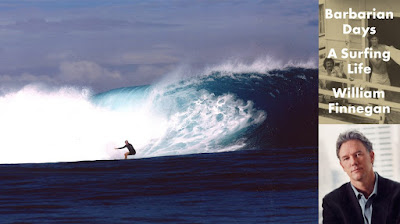 Once a long time ago when I dabbled briefly in art I tried to paint a breaking wave as various hues of blue rushing up a face and then curling over itself to form the tube that surfers dream of.   My effort to represent what I imagine to be one of the finer experiences of life wasn't much.  But William Finnegan's Barbarian Days is.  The book is a memoir documenting the author's attempt to find and ride the perfect wave.  I can't say that he succeeds entirely at this task because no book possibly could; the experience belies textual description.  But he does about a good a job as one could, given the limitations of the printed word.

The core of the memoir is a bildungsroman in the classic sense of the word.  Finnegan graduates from University of California at Santa Cruz in 1974 and soon thereafter sets out across the southern hemisphere on a multiyear quest for the perfect wave stopping along the way to work as a dishwasher in Australia and a teacher in a South African ghetto.   Through it all Finnegan attempts to understand how to indulge his obsession while at the same time becoming a political journalist who is mindful of the welfare of others.

On one level this is a familiar framing:  a hippie going through an extended mid-twenties adolescence struggles to reconcile his selfish and hedonistic passions with the vocational and familial responsibilities that loom as one contemplates adulthood.  And to some extent the memoir is that.  Finnegan drops acid in Honolua Bay.  He avails himself of the hospitality of Pacific islanders without repaying them in kind.  He defrauds American Express in Thailand to extend his idyll.   He dates (and ultimately discards) a series of woman who, had he been less irresolute, might have married him.  He assumes physical and mortal risks in the surf that would make any mother turn over in her grave.  In short, he riots in the excesses of the 70s and all of the privileges that were extended to a certain socio-economic segment of that American generation.  And yet, instead of giving into this life, Finnegan emerges at the other end as a father in a stable marriage and as a renowned political journalist reporting on social injustices across the globe.

What is less familiar about this bildungsroman is that while Finnegan grows up he never leaves the beach behind.   To this day, he continues to make surfing forays from his home in New York City to various spots along the New Jersey and Long Island shores.  And he finds time to surf in exotic foreign locales as well.  Do these forays represent a lapse?  A signal that he hasn't grown up and that irrepressible adolescent inclinations peek out from behind the veneer of his adult gravitas?  That is one way to portray it.  But I want to be more charitable.  It's not just Finnegan vacillating between the pull of a selfish individualism and the push of a more communitarian and selfless nature.   It's not just the sensibilities of the “me decade” dueling with those of the “we decade.”  Rather, it's Finnegan realizing that a life well lived can (and should) have room for both activities.  Reporting on social injustices as Finnegan does deserves the highest accolades.  It's what Aristotle was talking about when he argued that the telos of being human is to be political.  But those adult virtues, celebrated as they are, don't need to eclipse the virtues of immersing oneself in nature and bearing witness to its sublime beauty. Both define the good life.  And both, in their proper measure, are worthy of pursuit. In Barbarian Days Finnegan shows how he found those measures.

Posted by Luke Fernandez at 7:13 PM No comments: