Google's Doodles and the Waning of Serendipity 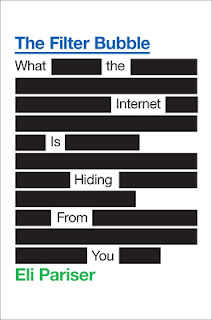 I just finished reading The Filter Bubble by Eli Pariser, who is the current president of moveon.org.  In keeping with the interests of that organization, Pariser’s book is an attempt (at least tacitly) to expand the communitarian and civic capacities of the Web.  But he makes his way there by arguing that the Web is confining rather than expanding our cognitive horizons.  Instead of introducing us to a broader and more varied set of people, the Web is increasingly taking us to points of view that are congruent rather than divergent with our own.  With personalized search and personalized social networking, the 'net introduces us to places and people we already like and that we’re already interested in.  As searching and matching algorithms improve, we’re increasingly exposed to material that is already relevant to our lives.  This, of course, is good up to a point: we like relevance.  The downside is that we’re challenged less and less to consider or visit perspectives that differ from our own.

These trends have been in the works for many years now – Cass Sunstein famously identified them as far back as 2002 in the book Republic.com.  But, as Pariser argues, what makes them more worrisome in 2012 is that they’ve become more insidious.  In the past we narrowed our horizons through conscious acts: we went to nytimes.com instead of foxnews.com (or vice versa) by choice and more or less deliberately.  But as the Web has become personalized, these choices are increasingly made for us behind the scenes in ways that we’re only vaguely aware of.  When I visit Amazon.com and shop for The Audacity of Hope, Amazon also suggests I buy Bill Clinton’s memoir, but not say, Bill O’Reilly’s Pinheads and Patriots.  And when I visit Facebook, my friends, more often than not, seem to share similar points of view.  Pariser doesn’t reference Marx, but the filter is the modern generator of false consciousness.  In the past we did our own Web filtering.  But now our filters are selected behind the scenes.  In the brave new world of the personalized Web our false consciousness is created for us.

In Pariser’s closing chapter, he offers up a number of things that individuals, corporations and governments can do to allay the more insidious effects of filtering.  He suggests that as individuals we occasionally erase our tracks so that sites have a more difficult time personalizing their content. (To paraphrase Pariser: “If we don’t erase our [Web] history we are condemned to repeat it").  For corporations, he suggests that their personalization algorithms be made more transparent and that a little serendipity be introduced into searches so we’re occasionally exposed to something beyond our current interests and desires.  And for governments he suggests a stronger role in overseeing and regulating personalization.

There are problems with Pariser’s suggested solutions and Evgeny Morozov, in his own review of Pariser, brings a very important one to light.  In expanding our civic and communitarian and serendipitous encounters, it would be nice if Google occasionally popped up a link to “What is happening in Darfur?” when we type “Lady Gaga” into Google.  But who exactly is supposed to decide what these serendipitous experiences are to be?  We may want to allay some of the cognitive deficiencies that the current 'net breeds.  But the danger in doing so is that we replace one bias with another.  In looking a little further into this I visited the thousands of doodles (e.g. custom banners) that Google has generated in the past couple of years.  Not surprisingly I didn’t see much there that’s over-the-top civic or political.  But maybe that sin of omission is better than the alternative: I prefer “don't be evil” (their current motto) to “do good but risk partisanship and bias in the attempt.”

Pariser may not provide convincing fixes, but his description of the problem makes the book a worthy read.  One would think that as the information stream accelerates we’d become increasingly subject to distractions and to new ways of seeing the world.  In fact, Clay Shirky touches on this point in “It’s Not Information Overload. It’s Filter Failure:” the filters which the mass media industry imposed on late 20th century media consumers have been corroded by the advent of the Web.    But the trends that Shirky makes light of  may be reversing.  Our cognitive horizons may be contracting rather than expanding in the age of personalization.  And our attention blindness may be increasing rather than decreasing as the filter bubble grows.  In bringing those concerns to light, Pariser’s has done good work.
Posted by Luke Fernandez at 4:38 PM No comments: