I went to a Halloween costume party Saturday night.  The theme was "Come as your favorite religious figure."  Maybe we don't have enough diversity in our university community because (without any coordination) two of us showed up as Steve Jobs. 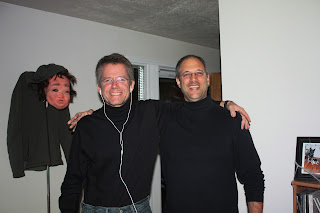 I'm on the left and my friend Dave is on the right.
Posted by Luke Fernandez at 6:44 PM No comments:


It’s the day after the Open Education conference in Park City. What can I say in a brief blog post to mark that event?  I want to thank Brian Jacobs of Akademos for attending the conference and being one of its sponsors.  We met while suffering through the trials of studying political theory in grad school.  While neither of us has become a practicing political theorist, we’ve been disciplined (for better or for worse) by our common education.  Over the years I’ve attended a lot of open-oriented conferences and been exposed to a lot of insightful perspectives.  But while that diversity has been good it was gratifying to be there with someone who was familiar with the same disciplinary frameworks I use for making sense of what a social movement like open education is all about.

That isn’t to say that I’ve got it all figured out beyond noting that the open ed movement gathers together a set of people and beliefs and practices that belie easy generalization.  This was epitomized on Wednesday when  Jim Groome began his presentation by popping out of a tent he’d pitched on stage as a way of drawing connections between the Occupy Wall Street movement and the open education initiative.  Jim gave an inspiring account of his teaching which is bold and experimental and seems to engage his students and prompt them to develop new media literacy.  But however important that message was, it was overshadowed by the stylistic contrasts between himself and the other featured speaker who was Josh Jarrett, Deputy Director of the Bill and Melinda Gates Foundation.  Where Jim presented in an untucked t-shirt, Josh showed up in a blazer.  Where Jim flashed slides of Wonder Woman, Josh spoke in sobering terms of budget challenges, demographic changes and educational completion rates.   When the presentations ended David Wiley, thanked both speakers and asked the audience to reflect on the contrasts and on how these different archetypes complement and (perhaps sometimes) antagonize one another.

A presenter immediately after those keynotes asked the audience who they most identified with, and the answers varied.  Some said Jim, some said Josh, and milquetoasts like me said both (even though I was wearing a blazer). All of this is to say that, like the Occupy Wall Street movement, open education isn’t a phenomenon that is simple to define, and is replete with marked contrasts.  Its constituents identify with the underprivileged but the conference was hosted in a rarified and expensive locale.   Its constituents are attracted to archetypes of rebellion but the movement’s locus is in one of the more conservative states in the union.  It challenges traditional ways of disciplining the faculties but is led in part by a resurging discipline of instructional design.  Its advocates celebrate openness and democratization and sharing and the disruption of traditional academic practices.  But they promote different degrees of openness, and democratization and disruption.   It’s been interesting to see how this coalition has come together and whether it stays together going forward.
Posted by Luke Fernandez at 5:05 PM No comments:

Are Machine's Making Us Stupid?

Here's the poster that my colleague made for our NEH funded spring course  (since it's a new class we need to do a little advertising around campus to make sure students know about it ): 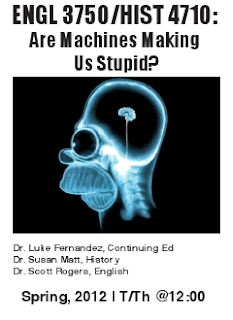 Following the pop culture reference, and the fact that we anticipate some interesting cross-generational conversations in the class, what would the appropriate iconography be if the poster had depicted an x-ray of Bart's brain, rather than Homer's?
Posted by Luke Fernandez at 10:38 AM No comments:

If you happen to be going to Educause 2011 in Philadelphia come by the following talk to find out what Chuck Severance has to say about openness and his book Sakai: Free as in Freedom (Alpha).  We'll be taking questions from the audience but feel free to e-mail before-hand with any questions you think are particularly worth fielding.

Posted by Luke Fernandez at 11:36 AM No comments:

On the Internet Nobody Should Be a Dog: A Review of Cathy Davidson's Now You See It

In the 45 second Ape In the Midst selective attention test  (you can take it yourself above) participants are asked to focus closely on a video showing people passing basketballs back and forth.  After the video finishes they are asked to report how many passes were made.  But more importantly, participants are also asked whether they saw the gorilla.  Many viewers actually miss seeing it.

In her new book Now You See It, Cathy Davidson uses the exercise to suggest that in focusing closely on one thing we become blind to other significant events in our surroundings and that this “attention blindness” is a problem we sorely need to redress in the 21st century.  For Davidson, the efficiency imperatives of the industrial age drove a cult of single-tasking that is epitomized in the assembly line and Frederick Winslow Taylor’s efforts to focus workers' labors on a set of narrow tasks so as to increase productivity in the work place.  Davidson goes on to argue that inculcating an ethic of mono-tasking no longer prepares our students for work in the 21st century where screens increasingly demand attention to multiple inputs.

Davidson never mentions Marx (or even cites him in the index) but her argument recalls a Marxist analysis: ideology (or  the learning and beliefs and the educational institutions that lend support to that learning and beliefs) help legitimate particular relations of production.  But as those relations of production change, so eventually must the ideology.  In this respect Davidson’s book is a true wake-up call:  as academics (who are in part stewards and conservators of past knowledge) we might be inclined to hallow traditional methods of learning.  But in so far as we buy into a marxist framework, Davidson is telling us that we better evolve if we don’t want to become apparatchiks to an old and fading way of doing things.

In many ways, I’m persuaded by Davidson’s argument.  Having gone through eight years of increasingly narrow and specialized study in grad school, I exited with a degree in political theory that was no longer marketable.  I’m a walking example of the opportunity costs and attention blindness that accrue when one focuses for too long and too hard on one subject.  And I know that there are plenty of other PhDs in archaic disciplines who can appreciate viscerally what Davidson means when she calls into question the legitimacy and virtues of mono-tasking.

Graduate students and professors sometimes legitimately feel that the demands of their profession encourage over-specialization.  And along with that, many of us feel a need to introduce more interdisciplinary courses into the undergraduate curriculum so students can see the connections between different areas of knowledge. (I suspect that this is in part what impelled Davidson to move from being an English professor to being a Professor of Interdisciplinary Studies.) And the relativists among us understand the need to introduce students to Nietzsche’s perspectivism and the virtues in seeing the world from multiple coigns of vantage.  More topically, following the 2011 Ig Noble award that was given to John Perry for celebrating structured procrastination, we know that being distracted by things of lesser importance can sometimes lead to accomplishments of consequence.

At the same time, however, we also know, that the production filters thrown up by 20th century mass media have been killed by the internet. We're doing less information filtering than before. As a result it’s more incumbent on us than ever to resurrect those filters in our capacity as consumers (c.f  Clay Shirky in his keynote "It's Not Information Overload It's Filter Failure") The cult of specialization and of mono-tasking and of filtering may have, as Davidson argues, some historically specific origins.  But some of those concerns transcend time and place.  After all, filtering, and confining our focus to a few activities, is what gives us the capacity to build great things and write (as Davidson has done) interesting books.  It’s the difference between us and Fido: we don’t bark at every passing stimulus.  The now famous New Yorker cartoon that was captioned “On the internet nobody knows you’re a dog” can be rewritten as a caution not to buy Davidson whole sale:  “On the internet nobody should be a dog.”  Fido for sure will bark at the gorilla.  But he won’t be able to count the basketballs! 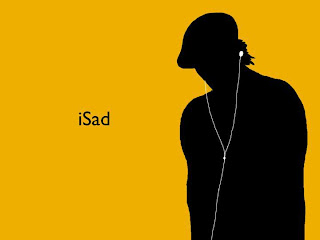 Posted by Luke Fernandez at 8:56 AM No comments: