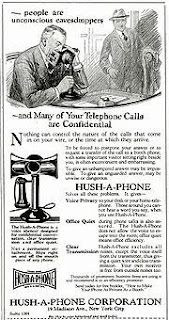 Having now completed Tim Wu's The Master Switch, I've been trying to think of weaknesses or ambiguities in his narrative that might stop me from buying the story wholesale. Boiled down, Wu argues that the history of information systems in America is a cyclical one where industries move from open organization to closed and back to open:

History shows a typical progression of information technologies: from somebody’s hobby to somebody’s industry; from jury-rigged contraption to slick production marvel; from a freely accessible channel to one strictly controlled by a single corporation or cartel—from open to closed system....History also shows that whatever has been closed too long is ripe for ingenuity's assault: in time a closed industry can be opened anew....This oscillation of information industries between open and closed is so typical a phenomenon that I have given it a name:"the cycle" [p. 6 Wu]

While the majority of Wu's book is devoted to history, his intent is ultimately presentist. He's interested in using history to clarify whether the current openness of the Internet is subject to the same cyclical vacillations that have occurred in past evolutions of information networks. In Wu's view the cycle is still at work in the present day. In spite of the fact that an open architecture and philosophy is embedded in the Internet, Wu doesn't think that we've transcended history. This time is no different: we're still subject to the cycle. And what makes matters worse is that the cycle this time around is more consequential than it's ever been before. These arguments shouldn’t be unfamiliar to people who have read Benkler’s The Wealth of Networks and his argument that we’ve come to a crossroads where we can choose to protect the virtues of a shared electrical commons or allow the big media conglomerates to divvy it into private spaces. But Benkler’s argument is buried in a massive tome that isn’t an easy read. Wu, in contrast, makes the story quite compelling:

At the beginning of the 2010s, as a chasm opened between Google and its allies like Amazon, eBay, and nonprofits like Wikipedia on the one side and Apple, AT&T, and the entertainment conglomerates on the other, it was obvious that what loomed was just the latest iteration of the perennial ideological struggle into which every information industry is eventually swept. It is the old conflict between the concepts of the open system and the closed, between the forces of centralized order and those of dispersed variety. The antagonists assume new forms, the generals change, but essentially the same battles are fought over and over again. It is the very essence of the Cycle, which even a technology as radical and powerful as the Internet seems able at most to moderate but not to abolish.

….While it may sound fanciful, the contest in question is more like one of polar bears battling lions for domination of the world. Each animal, insuperably dominant in its natural element—the polar bear on ice and snow, the lion on the open plains—will undertake a land grab where it has no natural business being. The only practicable strategy will be a campaign of climate change, the polar seeking to cover as much of the world with snow as they can, while the lion tries to coax a savannah from the edges of a tundra. Sounds absurd, but for these mighty predators, it’s simply the law of nature.[p. 289-290]

No doubt Wu is a good story teller, and if making references to bears and lions seems like a stretched metaphor it’s still a compelling way to describe the crisis. But like many stories I wonder whether the portrait is a little too starkly drawn. Are we really in a zero sum game? Or is there room for both lions and polar bears?

According to Randal Picker’s blog (just a quick note that I think it’s not him speaking so much as a law student whose seminar reflections he’s posting) there's room for both:

While Professor Wu’s criticisms of Apple’s closed hardware designs are accurate, in my opinion Apple’s tight walls predominantly surround just their hardware product and are not aimed at preventing the open interconnection that has allowed for Google and the internet to thrive. In this sense…. the habitats are not so mutually exclusive that they must now exist at loggerheads competing for their future corporate existence. In my opinion, Apple’s business model is not primarily focused on its ability to strike deals with the old conglomerates and monopolists, but instead on moving their proprietary hardware and protecting the brand that allows for the inflated prices at which they sell it. [http://picker.typepad.com/picker_seminar/2011/02/revisiting-polar-bears-and-lions.html ]

Duly noted. Still, one of the comments notes, it's not strictly a question of infrastructure bandwidth so much as the limited attention span of surfers. If we all gravitate toward the polish and sparkle of content on a tethered device like the iPad we’re moving a step away from the ragged freedom of a wide open world-wide-web. To boot, we may be moving a little closer to abdicating the university’s responsibility in arbitrating culture and letting Steve Jobs and his media partners become --as Wu calls them-- our new "cultural surrogates." This isn’t to say that one can’t buy and use an iPad in the university (I own more than my share of Apple devices). But it’s good to know that our consumer choices aren’t completely without consequence or symbolism.
Posted by Luke Fernandez at 7:16 PM 1 comment: