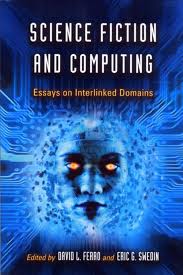 This blog is sort of an informal companion to a colloquium we hold here at Weber which is also called "I.T. in the University."  Recently we had the privilege of reading Science Fiction and Computing: Essays on Interlinked Domains which was edited by Eric Swedin and David Ferro who are colleagues of mine here at Weber.  The below is a guest post by them.

Most students of the history of science and the history of technology will remember “the two cultures” from their education.  The phrase comes from the English molecular physicist and novelist C. P. Snow who described in The Two Cultures and the Scientific Revolution (1959) that a gulf of understanding existed between scientists and literary intellectuals.  The people within these two cultures understood their own cultures, but scientists often did not appreciate the humanities, and humanities-oriented intellectuals did not understand science.  Snow advocated education to overcome the ignorance on both sides.

The two cultures is a living reality even today and that the divide still exists is obvious on many college campuses.  Professors tend to dialogue only with professors in closely related disciplines and students often find themselves drawn either to science, technology, and engineering, or to the arts and humanities.  They learn different languages and different values about what is important.  A good example is the arts and humanities student who dreads taking a science class because they just see mountains of memorization and a way of thinking that bewilders them.  They think of a math class as an act of cruelty.  Of course, a science or technology student who is sent off to take their general education class in literature looks at a pile of novels that they have to read for class as nothing less than torture.  They find the novels boring and the discussions to be vague and full of opinions unsupported by any sort of methodical thought.

This divide is most unfortunate and people on both sides need to make the effort to learn about information from the other side of the divide, even if is material that does not interest them.  The authors of this guest blog entry have straddled this divide through doctorates from the arts and humanities side of the divide and considerable experience in teaching both computer technology courses and history courses.  One of the areas that drew our interest was science fiction.  It is often thought that people on the science and technology side of the divide have no appreciation of literature, but that it not true.  They just have their own literature.

As computer experts, one in a Computer Science program and the other in an Information Systems program, we often noticed how many people in our fields that we knew liked science fiction.  This was particularly true of the students and professors in our field who were the top performers.  We wondered if we could document a connection between computing and science fiction.  This led to some articles and then to a volume of interdisciplinary essays that we edited, Science Fiction and Computing: Essays on Interlinked Domains (McFarland, 2011).  We found strong linkages.

Science fiction has often provided terms, concepts, and a milieu of technological enthusiasm for pioneers in the computer field.  Science fiction also provided ways for computer innovators to talk about where they thought computers were going.  More research needs to be done on the linkages between science fiction and computers, a wonderful opportunity for different academic disciplines to talk to each other, and we hope our book helps that conversation along.  We also hope that our book will encourage academics, educators, and other people to think about how we can bridge the two divides in our intellectual culture.  We need academics and students who are grounded in science and technology to appreciate the contributions made by the arts and humanities, and for the reverse to be true.
Posted by Luke Fernandez at 5:04 PM No comments: