The Heart of Spain 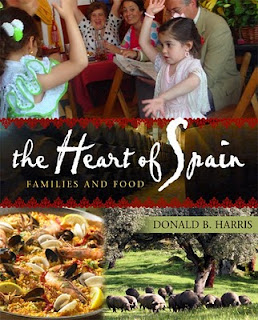 As a Christmas present my dad just sent me a copy of Donald Harris's The Heart of Spain. My dad wrote the preamble. Harris is the founder of Tienda.com and it's not surprising that the book is a vision of Spain as seen through it's culinary traditions. Food, of course, is a elemental (alimental?) venue through which to understand culture. I tried to do a bit of the same in my own blog post "Tourism and Tequila Worms" which recounts (unfortunately a little pedantically) a tequila experience I had in Tepic about a year ago.
Posted by Luke Fernandez at 2:59 PM No comments: 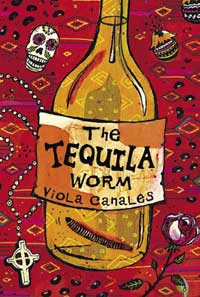 This past January I went to Mexico for a week. During the first few days I helped expand an exchange between Weber State University -- which is next to Utah’s Great Salt Lake -- and the University Autonoma de Nayarit (UAN) in Tepic, which is an hour inland from the Pacific coast. A three-hour plane flight separates these two universities but they are linked by a common ecology; millions of birds fly between the Great Salt Lake and Nayarit's warm Pacific wet-lands every year. To preserve this flight corridor, Weber State, UAN and several other organizations have been sponsoring yearly bird festivals, bird education programs, and academic exchanges.

The business side of things met with considerable success. Weber State and UAN agreed on a number of joint projects that we hope to carry through in the next eighteen months. While the planning was carried out in board-rooms and administrative offices, there was also, during the latter half of the visit, some time for visiting the beach, wandering the market, eating out, and going on bird-watching tours through crocodile infested mangrove swamps. So if our primary purpose was business, we also spent some time being tourists.

At first gloss, these activities seem dissonant. After all, the hard work of formalizing agreements in offices is precisely the type of activity that tourists try to escape. And if the contrasts between activities that feel like work and activities that feel like play registered on a gut level, it was also confirmed by a book I was reading in my spare time titled Holiday in Mexico: Critical Reflections on Tourism and Tourist Encounters (edited by Dina Berger and Andrew Wood). While the book finds many redeeming features in tourism, the closing essay included part of a polemic against tourism that Jamaica Kinkaid wrote in A Small Place:

[the tourist is] an ugly, empty thing, a stupid thing, a piece of rubbish pausing here and there to gaze at this and taste that….never [realizing] that the people who inhabit the place in which you have just paused cannot stand you, that behind their closed doors they laugh at your strangeness. p.371

Kinkaid’s polemic is wrenching and her point is reinforced by the fact that while over 15 million American tourists visit Mexico each year, far fewer Mexicans come to the U.S. as tourists. Moreover, while tourists are interested in seeing an authentic Mexican culture, a lot of what they actually encounter are constructed experiences that offer a view of Mexico far different from how Mexicans actually live.

The book made me wonder about our mix of activities and identities. In the capacity of academics we were there with an express purpose -- to forge stronger intellectual links with UAN by creating a collaborative community of academics who could research and teach together. If, however, we were turning into neo-colonialists when we replaced our suits with tourist garb then maybe our vocational and recreational selves were working at cross purposes. If in one scenario we were trying to meet our Mexican hosts as equals and as peers, in the next scenario, in the role of tourists we were re-awakening invidious relationships that might distance us from our Mexican hosts.

But if one can’t fully cleanse tourism of its unequal power dynamics, and the possibility that tourists are not really seeing the real Mexico when they visit, Dina Berger explains that U.S.-Mexican tourism has also served as a form of informal diplomacy:

Tourists, through pleasure travel, learned what made Mexico tick and learned to appreciate cultural difference and likeness….. those who enacted it seemingly played some role in forwarding foreign policy agendas, whether aware of it or not….tourism can and has acted as a medium for improving Mexican-U.S. relations. After all, through the act of travel, members of different nations came face-to-face with one another in a potentially meaningful exchange. And like more formal programs of public diplomacy, a certain image of national identity was portrayed by both host and guest. p.111-114

For me, tourism played this diplomatic role in two distinct ways. First, it served to break down culinary barriers, and second, it helped to assuage fears that had been instilled in me through the media.

In the afternoon after our first round of meetings, UAN representatives took us to a restaurant called “El Marlin.” There we were served a specialty called sarandeado which was a local fish marinated in soy sauce, lime and chiles, smoked over a wood fire and served with fresh onions, tomatoes and cucumbers. During dinner we were plied with rounds of bottled beer which I drank even though I can never recall drinking with fellow administrators in Utah, where our campus is dry. I was warmly warned, that at the end of the dinner we’d be having a shot of tequila and that I might be asked to eat the tequila worm.

I never actually was asked to swallow the worm but in acquiescing to the food and drink and to the challenge of eating the tequila worm I was engaging in what Jeffrey Pilcher, in “Jose Cuervo and the Gentrified Worm,” described as a common touristic experience with multivalent meanings:

The dinner table provides an arena for building community through two distinct processes, the physical act of sharing sustenance with insiders and the symbolic boundaries that exclude the food of outsiders as inedible….Through food and drink, tourists from the United States have consumed their Mexican neighbors: alternately dominating, transforming, excluding and embracing them…p.221

Pilcher notes that the tequila worm is itself an invented tradition, put in place as a marketing gimmick by distillers in the 1940s. By eating the fabled tequila “gusano” I wasn’t about to eat something that originated authentically from Mexican folk culture. But in volunteering to eat it I was still trying to engage in informal diplomacy. My rationales for being careful about what I ate and drank in Mexico were pragmatic; I didn’t want to get sick, and as an emissary I needed to consider whether I had to abide by the puritanical drinking norms of my own culture. But on an alimental level, to resist food and drink was to create an organic barrier between my own culture and a foreign one. By sharing in a common repast, I was showing my willingness to cross a primordial boundary.

I hope that by participating in manufactured culinary tradition I helped to break down some informal barriers. But if it didn’t, I do know that tourism helped me to cross other barriers that I’d buttressed through fear. These fears included anxieties about getting kidnapped, having to pay exorbitant sums of money to corrupt policemen for minor traffic violations, and the fabled “turista.” A few months ago the New York Times identified Mexico as having the most kidnappings of any country, with over 7000 a year. And last spring Arizona state universities issued travel advisories discouraging students from visiting Mexico, because of the escalating drug-related violence. Although I had blithely traveled through Mexico in the late 80’s after college, these reports gave me serious pause. With over a million American expatriates living in Mexico it’s self-evident that these fears are overblown. The fact that they are exaggerated is made even more apparent in books like Gringos In Paradise and On Mexican Time: A New Life in San Miguel, both of which provide soothing accounts of North Americans leading happy and uneventful expatriate lives in Mexico. But if books can assuage worries, a far better way was simply to hop on a plane and visit Mexico in person. As a tourist many of my experiences may have been banal; I successfully drove for a week without having to pay an onerous bribe, I ate fresh vegetables and fruit shakes without incident, and (big surprise) I made it back to the states without getting kidnapped. While these may seem shallow, they served to take away my fears. As such they are an important first step to take before moving toward more genuine exchanges.

In the closing passages of The World Is Flat, Thomas Friedman exhorts that in a post 9/11 world we need to make sure to fathom the dangers that lie around us. At the same time, to live fruitfully in a flat world we also need to become masters of our fear:

It is always hard to know when we have crossed the line between justified safety measures and letting our imaginations get the best of us and thereby paralyzing ourselves with precautions….We all don’t need to become so gripped by imagining the worst in everyone around us that we shrink into ourselves…..We have to be the masters of our imaginations, not the prisoners…..Do whatever it takes, but get out the door. p.614-615

Books can help in putting one’s worst worries to rest. But it’s the actual act of getting out the door that really puts the most corrosive fears to rest. This isn’t to say that dangers don’t exist; indeed our Mexican hosts spent an entire evening dwelling on the growing violence in Mexico. But again, while the dangers of travel are real, it’s important not to over-estimate them; otherwise our ability to cross boundaries and to make connections with other cultures is seriously constrained.

As academics who’ve been steeped in the culture of political correctness and Kinkaid-like polemics, it’s easy to lose sight of the many if sometimes banal benefits that tourism offers. We think that if we can exchange ideas and collaborate on an intellectual endeavor that the rest of a friendship and an exchange will naturally fall into place. What we forget is that while academic collaboration can take us a long way, tourism can function as a useful complement. It isn’t likely to provide as much perspective into another culture as the experience of living in situ for a long period of time as an exchange student or faculty member. But it will take us a lot further than the compatriot who has simply stayed at home. Tourists, more-so than other travelers, fall victim to constructed forms of culture. After all, I’m pretty sure that in an average week average Mexicans are not having to ponder whether they’ll need to eat a tequila worm. But an encounter with constructed culture is better than no encounter at all.