Panel Discussion in the News

Our panel discussion on internet security and privacy was written up in the Standard Examiner and the Signpost.

Here by the way is the list of questions I brought to the panel in my capacity of moderator.  I didn't actually get to ask all of them of course:

1) Are we being watched?  What precisely is the substance of Edward Snowden's revelations?

2) How much do we need to temper our hopes that the internet can be a positive force for democracy and freedom?

3) Is the problem we are discussing a technological problem or a political one?

4) Is the choice between privacy and security always a zero sum game?

5) What historical abuses exist that might scare people who arent very concerned by the amount of govt. surveillance that is happening today?

9) Is the rule-of-law being abrogated? Do we have an independent judiciary and an open and accountable government?

10) What over-sight or checks and balances exist to ensure that our surveillance agencies are abiding by the law?

12) What surveillance actions, in the name of national security is it reasonable for the govt. to take?

13) Should our expectations about privacy evolve as our technology evolves?  Should privacy rights be determined by technological context?

14) Technology is always in the position of making the legal system play catch up.  New forms of surveillance emerge that the law and the courts haven’t anticipated.  Can the public be assured that surveillance wont be used for fishing expeditions, that surveillance data wont be stored in perpetuity, and only accessed as needed?

15) Given the abuses that Snowden/Greenwald have unveiled, is it reasonable for the public to demand a very high threshold for the gathering, storage, and use of surveillance information?
----put in audit mechanisms to sanction and uncover abuse.  But don’t put in place front end barriers
----fantasy that more info leads to greater clarity


16) In eastern european nations regimes looked at the telephone and said, oh, here is an opportunity to find out who is against us!  and then proceeded to put taps on their phones.  Don't we want to reject that?

17) Why should anybody who is not a criminal be worried?  "I have nothing to hide. So why worry?"

---A sensible answer if we could assume that govt. doesn't make mistakes, is always accurate, is always honest, and isn't full of Hoover types.  But are they?

19) Is the choice between privacy and security always a zero sum game?

20) Should we be more concerned about the way govt. is surveilling us, or the way private corporations do?  From whom do we have more to fear?

21) Is it effective to gather all this data?  Is more data necessarilly better?

22) Is Edward Snowden a hero or a traitor?

23) Would a public conversation about the powers of the NSA happened anyway in spite of Snowden?  Hadn't Obama asked

24) To what extent should we expect to see the powers of the NSA curbed (or at least more broadly audited) in the wake of Snowden's revelations?  Does the presidency have a very strong incentive to reform govt. surveillance?  Google and Amazon claim that they are experiencing serious losses due to customers who are uneasy about the Americans govt. power to tap into these services.  Will those losses incentivize the govt. to curtail surveillance more?


25) What can we do as citizens and or hacktivists to uphold the imperatives of security, privacy and the rule-of-law?
Posted by Luke Fernandez at 1:02 PM No comments:

Panel Discussion on Security and Privacy in the Digital Age

Here are posters for the upcoming panel discussion I'm organizing for the Technology Outreach Center. The official poster is the top one. I actually prefer the bottom one but people I talked to found the title too obscure: 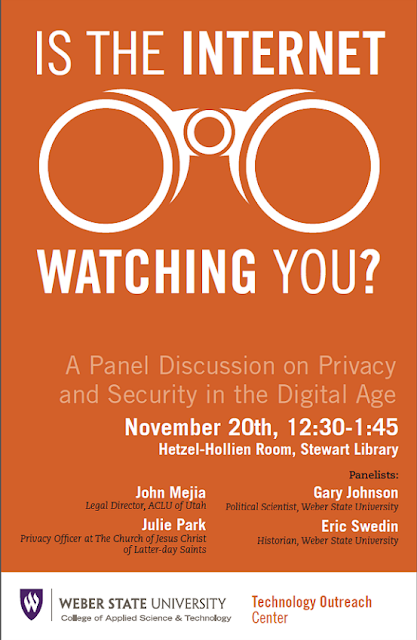 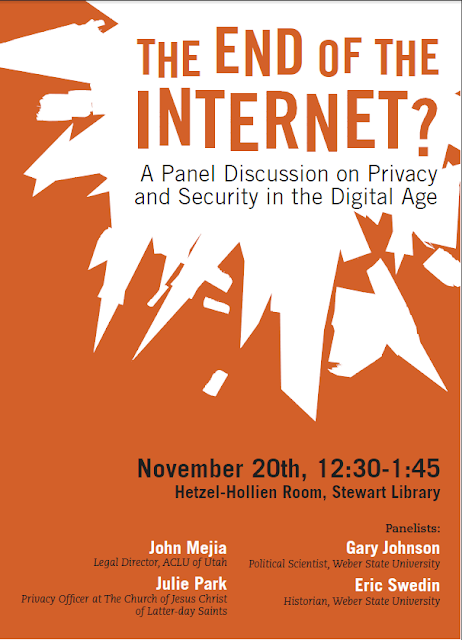 Posted by Luke Fernandez at 9:08 AM No comments:

Sanctuaries for the Mind in the Digital Age: A Conversation With William Powers

Below is an interview I did of William Powers when he visited our Weber State University campus. The interview is published in the Fall 2013 issue of Weber: The Contemporary West.

Posted by Luke Fernandez at 10:27 AM No comments: