My spouse and I are doing research on emotional responses to a variety of 19th and 20th century communication technologies.  While doing that, we've naturally been thinking about how past responses compare to contemporary ones.  There are a lot of interesting comparisons.  But one that is particularly topical is the Manti Te'o incident which resonates with a 1971 Readers Digest article titled "An Affair By Phone"(1) (which is a condensation from the book Another Self) by James Lees-Milne. The Readers Digest article is only three pages long and I'm tempted to copy and paste it straight into this blog.  But given the copyright restrictions, a short summary and a quote or two is all I can offer:

In September of 1941, Mr. Lees-Milne was recovering from a bombing raid in London and was trying to telephone a friend but accidentally got connected with a woman with whom he started chatting.   As Lees-Milne recalled:

"She was enchanting.  The late hour and our anonymity broke down all those absurdly conventional reserves which usually hedge two people during preliminary meetings after an introduction.  But when I suggested that we ought to introduce ourselves, she would not have it. It might spoil everything, she said."

That chat turned into an extended telephone relationship that was predicated and enhanced by the medium in which it was conducted:

"Never a night passed when we were both in London that we did not telephone, no matter how late.  I would look forward to our next talk the whole preceding day.  If I went away for the weekend and was unable to telephone she complained that she could hardly get to sleep for loneliness."

In spite of this dependency, Lees-Milne never persuaded the woman to meet in person because she thought that if they met in person and "found we did not love, as then we did, it would kill her."

The affair continued for some time until one night the woman's phone line went dead.  Lees-Milne investigated and found out that the woman had been killed in a direct hit during the London bombings.

Ok, it's not quite the Manti Te'o story but the narratives are similar enough to evoke comparison: both relationships take place entirely over a network, the network, in turn, simultaneously enhances and limits the relationship.  And of course, both stories end in tragedy (although one tragedy may be true while the other is imaginary).

There are other more recent historical precedents to the Manti Te'o's including the 2010 film Catfish.  But "An Affair By Phone" serves to remind us that online relationships are not of recent vintage: they've been around for some time--and some embody genuine emotion.

As a way of following up on my Walden-Zone app storyboards I've been looking at other apps that do similar things.  One that came to my attention recently was the Cinemode  app which is advertised at the beginning of movies in Cinemark theaters:

I used it last night while watching Django.  All Cinemode seemed to do was dim the screen and send me a coupon for a free drink after the movie ended.  Oddly, I mistakenly used it at a non-Cinemark theater so my guess is that it's not location aware.  Here are some observations about it:

1)  I like Cinemode's carrot (rather than stick) approach toward encouraging disconnection.  It encourages particular behaviors by giving away free drinks rather than by kicking people out of the theater.   In contrast, in my storyboards I envision students logging into the app to recover a lab fee.  But that is sort of a stick-masquerading-as-a-carrot.  And another problem with the lab fee approach is that I doubt that many universities would allow instructors to impose such a fee even if it was ultimately redeemable.  Following Cinemode's model, maybe a better approach is simply to make my app function as an attendance taker: The student logs in at the beginning of class and if they stay logged into the app for the whole class (or a good portion of the class) then that counts as a day of attendance (which could then be counted as part of their grade).    Another advantage of doing it this way is that my app would then double as an attendance taker.

2) One paradox of building attendance-taking into a mobile app is that one then needs to figure out how to accommodate the students who don't have smart phones.  In my C.S. department that's a diminishing group of people (about 85% of our students carry them).  But it's still a cohort of users that need to be catered to.  I guess one can still pass around a piece of paper or provide a web login if the classroom is computer equipped.  But I'm open to other suggestions.

3) A common question raised when I peddle the app is that students with offspring want to stay in touch with their kids even when in class.  My reply is that a Walden-zone app isn't a device that is meant to be an enforcement mechanism so much as a mechanism that gently encourages disconnection to counter the way that most apps (and Web business models) gently encourage more connection.  To accommodate parents, the app would have a variety of disconnection settings that they could choose from.   Fully enabled, the app would dim the screen and disable the audio and the vibrating mechanism.  But users could choose what level of disconnection they prefer.  The point of the app is to encourage mindfulness about one's connections and to encourage practices that counter the digital-maximalist philosophy that is embedded in most of our apps.  It isn't meant as a draconian device that stamps out disagreements about digital practices or denies people their freedom to choose.

4) Speaking of disagreements, emerging technologies are fertile ground for arguing about what constitutes proper social etiquette.  In building a Walden zone app, my intention is to raise greater mindfulness about these disagreements.  Cinemode seems already to have had that desired effect in the following exchange in the comments section of the its web site:


Anyone who texts during a movie does not love film. End of discussion. They’re only there to see “what’s happening,” not caring at all for mood, or the wonderful spell that a movie is supposed to put you in. Cell phones have all but ruined the moviegoing experience.
Comment by Jack — Wednesday November 14, 2012 @ 5:23pm EST


A lively exchange!  (Hopefully an academically oriented Walden-zone app can encourage a slightly more amicable and nuanced discussion).`
Posted by Luke Fernandez at 11:18 AM 1 comment:

Last year we developed a Concentration Browser which was intended to help students develop greater mindfulness about their digital connections and the contexts where those connections encourage (and sometimes discourage) learning. As a follow-up to that project I continue to think of digital apps that breed this mindufulness about digital connections. Here are two story boards that illustate some "Walden Zone" apps I'm thinking of developing. Both help to mute a cell phone during particular junctures in the day and the basic difference between them is that the first is time based whereas the second is location based: 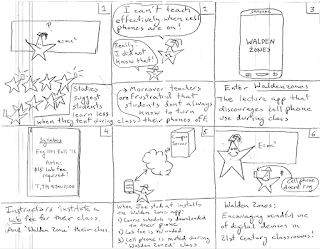 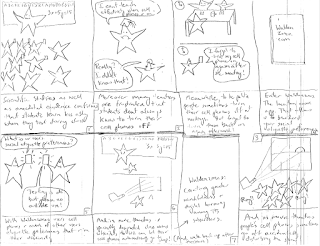 At tomorrow's AHA THATCamp we hope to be able to peddle these apps while at the same time broaching a set of related philosophical questions.(Footnote 1) What do you think? Are either of these story-boards compelling to you? How might they be modified so that they are compelling?

1 "Are our present concerns about "information overload" and "digital distraction" and the need for "Walden zones" and "digital sabbaths" simply a form of “moral panic?” Are they simply the latest iteration of longstanding fears about the new and unknown? Didn't earlier generations' worry about the way that movies, or rock and roll, or television, were affecting America's youth? Or are our present worries something to be taken seriously? What insights can the humanities bring to bear in answering these questions?"
Posted by Luke Fernandez at 11:51 AM No comments: 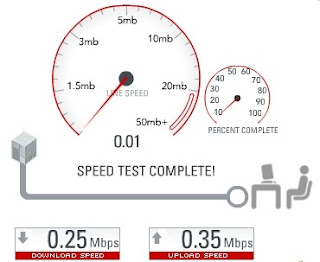 Posted by Luke Fernandez at 10:48 AM No comments: