I don't know of anyone who predicted the recent Blackboard-Angel initiative to merge. But it shouldn't come as a surprise to any of us. Even after the WebCT/Blackboard merger and the Blackboard patent suits we've continued to see universities make LMS acquisition decisions using rubrics that give little weight to our shared interest in enlarging the intellectual commons, fostering innovation, and discouraging LMS monopoly. Blackboard's initiatives are of a piece with what in the The Wealth of Networks Benkler and others have called the second enclosure movement. It's tempting to demonize Blackboard. But to the extent we ignore the potential enclosure of the commons when making LMS decisions we become, in some ways, "BlAngel's" willing victims.
Posted by Luke Fernandez at 11:14 AM No comments:

Last week I attended Apple's Academix 2009 conference at the University of Utah. There were some interesting presentations including ones by Paul Hammond, Richard Miller, Adam Gazzaley and David Wiley. I review some of what they talked about in Apple’s AcademiX 2009--the Closing and Opening Of University Minds

Posted by Luke Fernandez at 3:46 PM No comments: 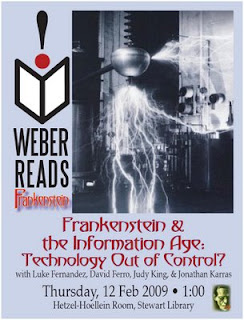 The adjacent poster advertises a recent panel discussion where we talked about university I.T. through the lens of Mary Shelley's Frankenstein. Shelley encourages us to revisit our faith in technology, science and progress. In the context of the university are the new technologies we are deploying on campus promoting the university's mission? What should we be doing to make sure this happens? How do we avoid becoming Victor Frankenstein? We have created all these wonderful inventions. But have these inventions become our master's?
Posted by Luke Fernandez at 11:58 AM No comments:

Posted by Luke Fernandez at 12:42 AM No comments: