An Anthem to Teen Privacy: A Review of danah boyd’s It’s Complicated 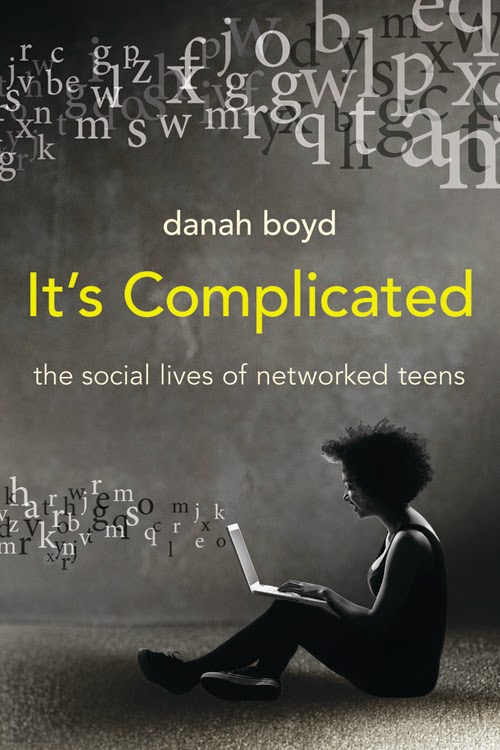 When I was a teenager in the late ‘70s I battled my parents in a cold war over privacy.  My campaigns were punctuated by giving my mom the silent treatment and by moving my room to the relative privacy of the basement.  Those years were angst ridden and I’m a little ashamed of them, so I don’t dwell on them much.  But danah boyd’s It’s Complicated brought those memories back in full flood.  That’s because It’s Complicated is about the challenges which American teens face as they move from socializing in the home or other forums that have been structured by their parents into social spaces that they define for themselves.  These new spaces are primarily digital and they didn’t exist in the ‘70s.  But take away the digital and the teens of today seem a lot like the teens of yesterday.  They’re looking for privacy.

If, like me, you are 50 and teach, your first inclination might be to think that kids these days are different; that they are tethered to their phones, that they don’t know when to put them away at the dinner table or in the classroom, and that their fixation on screens is corroding their ability or inclination to read anything approaching the length of a novel.  While I’m not ready to let go of these anxieties altogether,  It’s Complicated allays some of them by showing a semblance of my own largely forgotten high school self in the youth of today.    That’s because teens now, as then, are trying to create social spaces that aren’t surveiled by their parents.  For the youth of my own day this involved hiding our partying, gravitating to a house where parents were absent from the scene, or hanging out at the mall.  It was hard enough to create privacy in the ‘70s but according to Boyd things have not improved greatly in the 21st century.  That’s because teenagers still aren’t as free as adults.  And the constraints that adults place on them limit the ways in which they can socialize.  Teenagers don’t have as much access to cars as their parents.  They don’t have as many venues for gathering as adults do.  And the obligations of family life often require that they stay at home even though they would rather be with friends.  To transcend these constraints, youth naturally turn to social media since if they can’t meet as much as they would like in person, then at least the affordances of digital mediums allow them to still interact.

On the surface it might seem that teens lives have improved, since the options for connection today are much larger than they were 30 years ago.  After all, modern teens don’t just have access to a phone on the kitchen wall, they also have access to Snapchat, and Twitter, and texting, and the avalanche of other social media that capitalism is plying them with.  But while these technologies offer more opportunities for connection, they also present  new challenges.  One of the more daunting of these challenges Boyd calls “context collapse.”  While attempting to communicate with one set of friends, messages and images often get disseminated out to people (and especially parents) that teens aren’t intending to communicate with.  In the ‘70s context collapse was easily avoidable -- we’d simply start whispering on the phone, or arrange to meet at the mall or somewhere else that was outside the oversight of adults.  But these venues, according to Boyd, are increasingly inaccessible to young people as malls have imposed more restrictions on teens gathering, and as adults, in an attempt to protect their children from perceived dangers of the modern world, increasingly limit where teens can go.  In the face of these predicaments, teens naturally (or at least very understandably) migrate online, even if there they face context collapse and surveillance by parents and others who hold power over them.

Because young people seem to purposefully share more of themselves online then they should, and because they move online even in the presence of context collapse, it would seem on the surface that they aren’t all that interested in maintaining their privacy.  But Boyd makes clear this is a myth.  Youth today, as in my own day, are very interested in maintaining private spaces that aren’t subject to adult surveillance.  Unfortunately, 21st century teens are cursed by the fact that this privacy is much more complicated to maintain online.  Youth in all eras face extraordinary challenges in coming of age.  Only now, the hardships seem amplified, more complicated, and more deserving of sympathy and empathy.

The fact that It’s Complicated elicits empathy suggests how good an ethnographer Boyd is:  through 166 interviews with different teens (that she conducted with the help of Alice Marwick), she’s rendered her subjects so intelligible that we start to think that we feel the way they do.  But while Boyd wields her ethnographic tools skillfully, at times it seems to prevent her from giving credence to more critical perspectives on teen life in a digital age.  For example, Boyd seems unwilling to take seriously Nicholas Carr’s worries about  the shallowness of post-print culture or his concern that modern social media presents ever more opportunities for youthful attention to be interrupted.  (Boyd, instead seems wedded to the very questionable apologia that Kathy Davidson makes for multitasking).

Authors, of course, are entitled to their own intellectual predilections.  But these predilections  make Boyd indisposed to dwell on some of the costs that accrue to teens when they choose to connect through social media.  Boyd never pauses to consider that social media might be inhibiting youth’s ability to tolerate being alone.  Nor does she consider that aloneness when it’s experienced as solitude rather than loneliness can actually set the foundations for a more rewarding social life.  As a result, in It’s Complicated, the virtues of connection, sociability, and collaboration eclipse the virtues of solitude and disconnection.

This partiality becomes especially manifest in Boyd’s discussion of privacy.  In It’s Complicated, the privacy that is emphasized isn’t the privacy that leads to time alone, instead it’s a type of privacy that allow teens to socialize more extensively with other teens.  That type of privacy is important because without it we’re unlikely to become truly socialized beings.  But it elides the other important benefit of privacy which is learning how to spend time alone and to use that time in rewarding ways.  Ironically, Boyd must know this since she has written a good book.  So she knows (or at least tacitly knows) how important it is to find places to write that aren’t interrupted by phone calls and texts and all the other social minutia that get in the way of a coherent and focused thinking.  But while she’s carved out this sort of privacy for herself, she doesn’t feel obliged to remind teens (or their parents) that they might want to hack some of this privacy for themselves as well.  And therein lies the central lapse in It’s Complicated.  The book draws an incredibly sympathetic portrait of how hard it is to be a teen.  And it makes a persuasive case for why we should cut teens a little slack about their digital habits.  But in making their sociability intelligible it fails to ask young people to develop their selves or their individuality by spending time alone, away from social media.

This lapse is best illustrated in Boyd’s defense of two tenth graders who are recounting how time flies by when they use social media:

Lilly: It’s really awful with MySpace that I’ll click on somebody who’s sent a comment to me and I’ll look at somebody else, ’cause they have a “Top 10 Friends” and I’ll click on one of them, and then I’ll end up looking at people’s MySpaces in Tennessee and I started back with my neighbor.

Melanie: And it’s five hours later and you’re like, “Oh my God. Where have I been?”

While five hours might seem excessive and actually seems to border on addiction, Boyd tries to explain it away as an experience that is comparable to Csikszentmihalyi ‘s definition of the state of flow:

Addiction is one way to understand the dynamic that Lilly and Melanie are describing, but another is what pscychologist Mihaly Csikszentmihalyi  calls "flow."  For Csikszentmihalyi, flow is the state of complete and utter absorption.  It's the same sense that's colloquially described as being "in the zone."  Time disappears, attention focuses, and people feel euphorically engaged.

I get Boyd’s point here but the comparison isn’t really a fair one.  Flow is something rock climbers or surgeons experiences while they climb or operate.  It constitutes complete, uninterrupted and utter immersion in an activity. And it requires being presented with challenges that tests one’s skills.  Social media rarely if ever induces this sort of immersion or immersion.  Instead, it’s all about interruption and flitting from one social interaction to another.

Some might counter that flow, just like beauty, is in the eye of the beholder.  So if surgeons and rock climbers can experience flow maybe somebody can experience it while surfing social media or for that matter while watching television or washing dishes.    Still, I don’t really buy that line of argument.  When we fail to make distinctions about the relative merit of activities we stray into banality.  And conflating social media surfing with rock climbing or surgery only compounds this problem.  Which is why in the end I reject the comparison – as well as its tacit invitation to accept teen’s digital sociability more or less wholesale.

Boyd has written an anthem to teen privacy.  And it’s an anthem well worth rallying behind because teens should be accorded the privacy that allows them to associate freely with other teens.  Still, this anthem isn't setting the threshold high enough.  Teens also need to learn how to channel privacy not only toward licentious ends but toward more redeeming ones as well.  They need to learn how to spend time alone.  At least if they want to learn how to write books that are as good as dana boyd’s.
Posted by Luke Fernandez at 8:00 AM No comments:

Is the Telegraph Making Us Lonely?

Our presentation at the Theorizing The Web Conference in Brooklyn starts at 39:39 in the following video:

Posted by Luke Fernandez at 6:07 PM No comments:

Home Invasion: Family Life and the Threat of Technology

This is the poster that we displayed at the Council on Contemporary Families 17th Annual Conference in Miami: 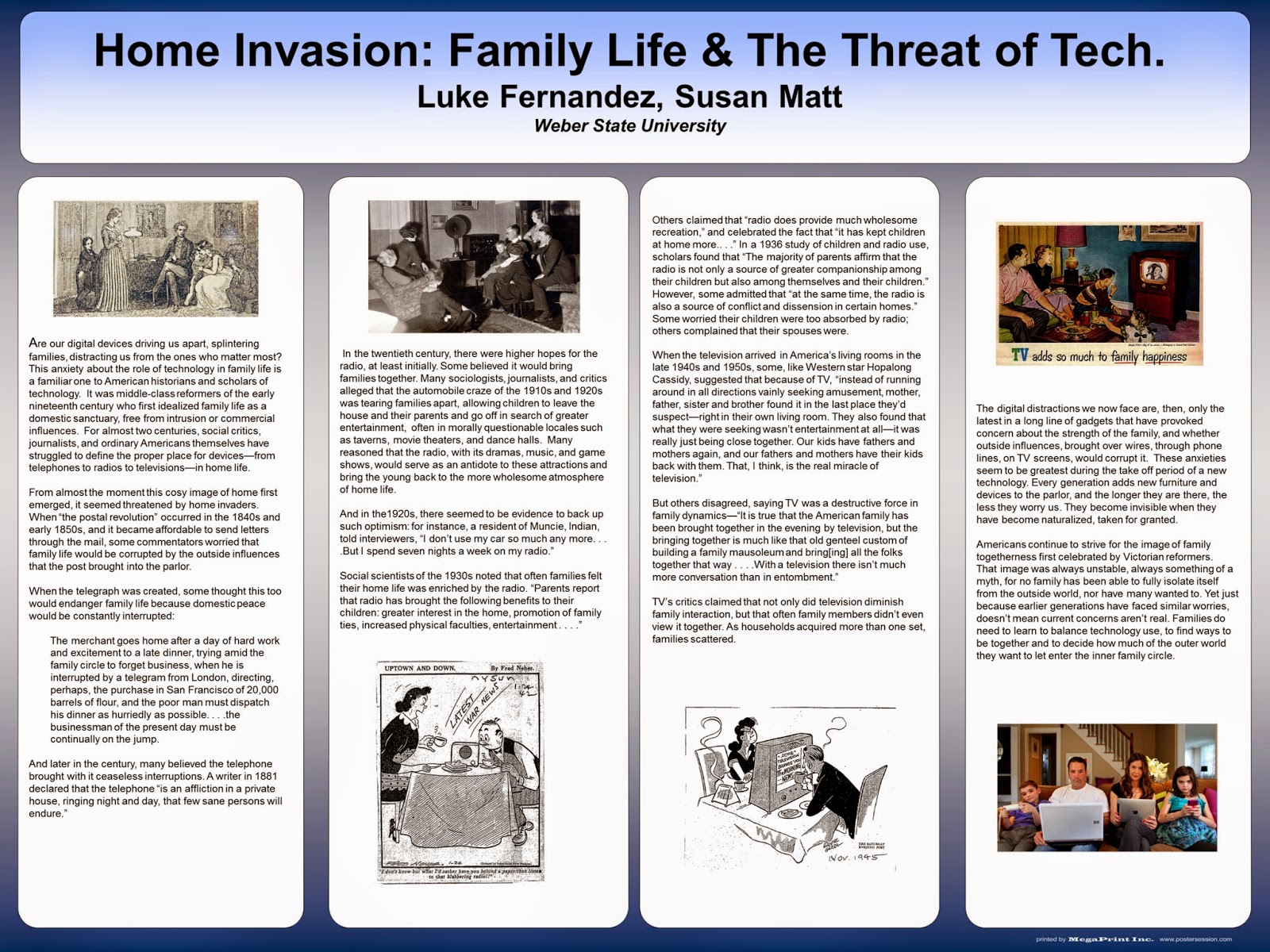 A fullsize PDF version is also viewable here.
Posted by Luke Fernandez at 9:04 AM No comments: