Tim Berners-Lee, The Web, And The Pursuit of the Public Good

Historians often lament the fact that we don’t really know enough about our past to make sense of who we are today.  That historian’s critique can be directed at all sorts of narratives,  like the American founding, the Civil War, the New Deal or any other important story in America’s past that define us.  But given how much our lives are defined by the Web, maybe there are additional benefits in reading about it’s origins.  Such was my reason for reading Tim Berners-Lee’s Weaving The Web. 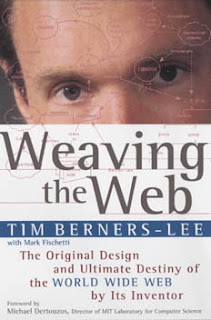 The book goes over ground that is familiar to many of us.  Like that moment in the fall of 1993 when I first heard about the Mosaic browser.  Or the time in 1994 when I downloaded Netscape and began surfing the Web.   It’s often only in retrospect that we recognize what moments hold import and for me anyway this was somewhat true then.  To be sure I marveled at Netscape and the way it had contracted the world. For example I distinctly remember being awed that I could instantly read a Web page that has been served up by a computer half way around the world.  But I don’t think I recognized the moment’s true weight and how ubiquitous the internet would become in my life. For instance I’m sure I had no idea that I’d spend a significant portion of my working day interacting with the Web.  At the time it was something I dialed into through a modem and used during one or two discrete moments of the day.  In other words, I liked it.  But it wasn’t yet an ambient presence that I followed (or maybe better put , followed me) everywhere and at every hour.

And that is what is interesting about Berners-Lee’s history.  While he too hadn’t recognized the entire import of his creation in the early 90s, he was a lot more prescient about it’s consequences than most of us.  And while he wasn’t entirely in control of how his creation would be adopted (what inventor is?)  his history is important because the texture of so many of our lives have been defined by events and visions that he was closely associated with.

One way to historicize our present online life is to simply mark our current surfing selves as the present and skip back to the moment Berners-Lee launched the first Web page at CERN in 1991.  That first Web page is a historical monument which deserves a place in our collective memories as much as say, the joining of the transcontinental railroad or the first telephone communication by Alexander Graham Bell.  But what’s left out, and what Berners-Lee’s book helps to illuminate is that our present online life doesn’t just rest on that achievement alone but is also contingent and the product of a myriad of other successes, failures, and ongoing battles.  What is often lost when we merely think of Berners-Lee as the inventor of the Web and the first person to post a Web page is that the Web wasn’t just a technological invention but an evolving set of communication practices and agreements that Berners-Lee was instrumental in forming.  Berners-Lee, after all, wasn’t the first to provide a clickable GUI that people could use to get information off the internet.  Those achievements were preceded by companies like Prodigy and AOL.  What Berners-Lee really did was to persuade a threshold number of user to adopt a set of communication protocols that no one company (as yet anyway) has been able to monopolize and make solely their own.  Today we can jump on the Web with a large number of browsers owned by a variety of different companies in large part because of Berners-Lee’s work and his belief that this was the right thing to do.

There were times in the early days of the Web when it looked like a particular company’s browser might become so ubiquitous and successful that it’s functionality would drive and define Web protocols.  And Berners-Lee, had he decided to form his own browser company, or join an existing one, might have crystallized such an outcome.  But Berners-Lee (at least as he recounts his story) didn’t have the same inclinations as a Marc Andreeson or a Bill Gates.  His primary interest was in making the Web into a thriving ecosystem rather than in the profit and success of an individual company.  It was this reason why, instead of creating a company, he decided instead to form and direct the World Wide Web Consortium (W3C) that would maintain and expand on the Web standards he had introduced through the introduction of his first Web site.  As he puts it:

…[m]y primary mission was to make sure that the Web I had crated continued to evolve.  There were still many things that could have gone wrong.  It could have faded away, been replaced by a different system, have fragmented, or changed its nature so that it ceased to exist as a universal medium…My motivation was to make sure that the Web became what I’d originally intended it to be – a universal medium for sharing information.  Starting a company would not have done much to further this goal, and it would have risked the prompting of competition, which could have turned the Web into a bunch of proprietary products.   (page 87)

Given that the book is by Berners-Lee it’s possible that passages like the above are just self-congratulatory autobiography.  But there’s a reason why Berners-Lee was knighted: by heading the W3C he’s been genuinely, insistently, and abidingly, interested in creating a universal medium for communication that transcends the domain of any single company.  We are where we are now not just because of his original inventiveness but because of his interest in developing a larger public good.

Posted by Luke Fernandez at 12:26 AM No comments: