Coming of Age in Call of Duty: Black Ops 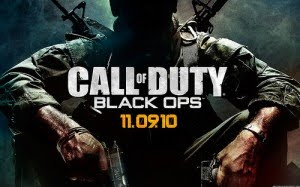 Ok, it’s an awkward title but I use it as an allusion to Tom Boellstorff’s book Coming of Age in Second Life which in turn is a play on Margaret Mead’s much more famous ethnography. In a short blog post of course I’m not going to do real ethnography but like Boellstorff I do wonder whether the tools of cultural analysis can be used to redeem (because they certainly can’t edify) my recent delinquent immersion into the much acclaimed video game Call of Duty: Black Ops. When I was describing my interest in doing an ethnographic analysis of the game to a colleague of mine he snickered which is a sensible reaction. After all, why even try to redeem a game that falls squarely in the genre of a first person shooter where the main activity is killing (virtually) other people?

Why not just embrace pretend warfare’s pleasures on face value? And isn’t this total folly in light of the recent assassination attempt of Rep. Gifford in Arizona? Shouldn’t we be moving away from symbolic violence?

There are those considerations, of course. And I won’t discount the desire for entertainment as a primary motivator for shelling out $300 on a Sony Playstation and another $45 on the actual game and a good portion of my waking life since I brought it home on Christmas Eve. If I’ve learned about all sorts arcane weaponry like a Claymore mine and a China Lake I might like to say that I’m doing it to become “more deeply acquainted with the artifacts that make up and populate Call of Duty’s culture.” But admittedly there are more base -- and less intellectual --motivations at work here.

So my colleague’s snickers are legitimate.

Still, serious studies of gaming culture and virtual worlds are increasingly common. Boellstorff isn’t alone and you are more than likely to have a colleague or two who treats the enterprise with gravitas. Here at Weber State for example my colleague Greg Anderson in the Computer Science department recently finished a dissertation titled “The Impact of Video Games on Team Cohesion” at Indiana State University. As Boellstorff reminds us, when we venture into virtual worlds we’re often plagued with the notion that we’re engaging in escapism. But that doesn’t mean that the experience can’t bleed back into our real life in positive and constructive ways if we allow ourselves to reflect on the experience. Here’s a rudimentary beginning. Think of the following as merely as a first day's set of field notes. If my spouse doesn’t grab the Playstation away from my cold dead hands, perhaps something more substantive will follow later:

First, despite what anyone tells you, gaming, at least for an initiate like me, is a real learning experience. The learning might not be about texts, or numbers, but it is deeply and engagingly a kinesthetic education in how to use one’s hands to operate the Playstation’s controller. The first time I picked up this tool I couldn’t do anything with it. But gradually, over the course of a few days of playing it begins to feel like an extension of one’s self. Following Matthew Crawford in Shopcraft as Soulcraft, maybe this intense use of one’s hands deserves more consideration than we’ve given it up until now. Here is Crawford quoting Mike Rose in The Mind at Work:

‘…..our testaments to physical work are so focused on the values such work exhibits rather than in the thought it requires. It is a subtle but pervasive omission….It is as though in our cultural iconography we are given the muscled arm, sleeve rolled tight against biceps, but no thought bright behind the eye, no image that links the hand and the brain.”

To be sure, there are problems with extending the analogy between craftwork and gaming too far. One works with actual material things in the real world whereas the other works with things in virtual worlds. And craftsmanship, is about making things whereas the traditional first person shooter is primarily (although not exclusively) about destroying things. But the intense use of one’s hands (and one’s eyes) is still there.

Second, when I finished the campaign (one of four distinct games in the Black Ops software) the credits which scrolled up the screen lasted much longer than they do at the end of a movie. And what was even more notable was how large their pool of quality assurance testers was. (Testers are people who go through the software attempting to uncover and document bugs so that the programmers can then fix them). In spite of this, the game still had its share of bugs in it which impelled me as a gamer to patiently and laboriously discover work-arounds. Unless I engaged in this discovery process I couldn’t proceed with the game. While there’s much more to quality assurance testing than just this, it’s an important part of the process. As such the game is socializing at least some section of the gaming public to procedures they will come across in the work force.

Third, Black Ops isn’t just developed by programmers. In the credits you’ll see a whole slew of citations to art directors, character artists, effects artists and environmental artists (to name just a few of the positions) that suggest that aesthetics isn’t just a passing concern to the studio which produced it.

In fact, unless you’ve got an antiquated Arnoldian high brow sensibility, you’d be hard pressed not to call this art and very engrossing and engaging art at that. So if there are manual and intellectual and work cultures embedded in Black Ops there are also artistic and aesthetic cultures to be found as well.

None of the above is to say that the symbolic violence which is produced and consumed in gaming culture isn’t something that we should be worried about. But this violence is embedded in a whole slew of other cultural practices and sensibilities which make gaming's simple dismissal unrealistic. Which might be another way of saying that gaming ethonography is good; we can learn a little more about who we are and who we want to be by promoting it.