Gary Bernhardt at CodeMash 2012 makes some observations about odd behaviors in Javascript in the following video titled WAT. (Jump into it around minute 1:30).  Hilarity ensues!
Posted by Luke Fernandez at 11:35 AM No comments:

When technology "wants", what does it want?

In getting students to grapple with the concept of technological determinism, and the larger issue of whether we shape technology or whether it shapes us, students often conflate technological determinism with tech dystopianism.  The conflation is easy to make since in Hollywood that's the usual association:  in movies like 2001: A Space Odyssey or Frankenstein, technology is often a malevolent and out-of-control presence that's leading to bad ends.  But while that's the conventional depiction, it's possible to have a different combination.  For example, in Kevin Kelley's view, technology has an inherent logic (e.g. in his words it has it's own 'wants') and those wants are leading, however gradually, toward progressive ends. These two examples represent only two permutations on the tech determinism-instrumentalism and tech utopianism-tech dystopian spectrums.  There are many other possible permutations which I try to map out in the following graph (click on the graph to expand it): 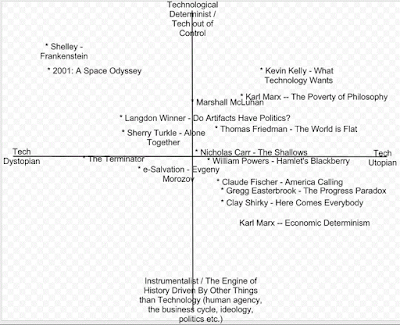 I'll admit that the graph has some serious limitations -- at times I'm locating authors with more specificity on these scales than is actually warranted.  But the larger point is to get students to think about these frameworks and to at least ask where technology pundits fall on these scales and where in turn, they as students fall.  In my experience most students are instrumentalists: the young in general tend to confer a lot of faith on free will. Curiously I also couldn't  think of too many dystopian instrumentalists.  Morozov might not even fall in that quadrant but I'll place him there as a way of contrasting him to Kelley who he critiques in e-Salvation.  If there are authors who I've mislocated let me know.  Likewise, if you know of technological declensionists (e.g. dystopians) who locate the engine of history in something else than technology let me know; I'd like to put a few more thinkers in the lower left hand quadrant.
Posted by Luke Fernandez at 4:59 PM No comments: