"From Behind The Safety of the Internet's Vast Perspex Shield" 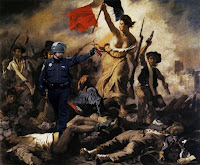 On the Music For Deck Chairs blog, the author (who wishes to remain anonymous) makes some interesting observations on the recent pepper spraying of UC Davis student demonstrators by a UC Davis police officer.  The subsequent footage of the chancellor making her way past a gauntlet of silent students is also very moving.  In spite of these images, Music For Deck Chairs cautions us not to be too judgmental "from behind the safety of the internet’s vast perspex shield" (I love that phrase).  For sure, none of us want to model our behavior after that of Officer Pike, but some of us in IT are also guilty at times of colluding with hierarchical thinking.  It's still unclear whether the UC Davis protests and the Occupy movement will have the impact that the Tea Party has.  But I don't want these things to go by completely unnoticed on this blog -- especially since there is still a tangential connection to IT and the university.  I've reposted my comment to Music For Deck Chairs below:

To segue from your last paragraph I’m reminded of David Noble who probably would have seen resonances between the actions of officer John Pike and initiatives of elearning administrators (I draw the connection only because your blog is dwelling on both). Here is what he says in Digital Diploma Mills:

“Once faculty and courses go online, administrators gain much greater direct control over faculty performance and course content than ever before and the potential for administrative scrutiny, supervision, regimentation, discipline and even censorship increase dramatically. At the same time, the use of the technology entails an inevitable extension of working time and an intensification of work as faculty struggle at all hours of the day and night to stay on top of the technology and respond, via chat rooms, virtual office hours, and e-mail, to both students and administrators to whom they have now become instantly and continuously accessible. The technology also allows for much more careful administrative monitoring of faculty availability, activities, and responsiveness.”

This isn’t to say that all forms of “collusion with hierarchical thinking” should be conflated. But as I think you are saying, we better check carefully to see whether our own houses aren’t made of glass before shaming other people too stridently.

I wonder too, whether that process of shaming will lead to positive social change or something else besides. Sometimes the shaming of egregious repression of social protest has resulted in positive social change ( for example, Bull Connor’s actions in Birmingham were ultimately a P.R. victory for the civil rights movement). But the irony of the UC Davis protests is that the students were there because they were objecting to a tuition hike. Those hikes, while due to many things, have at least a tenuous connection to the Berkeley protests of the late 60’s. Those earlier protests were stirring but they also alienated some Californians who weren’t interested in romanticizing the academy as a virtuous fifth estate. That alienation played a role in the election of Reagan and the defunding of California higher education. So yeah, we need to take inspiration from the Mario Savios of the world, and all those who are bold enough to choose the risks of civil disobedience over the cowardice of little-Eichmanns. But we need to do this in a way that keeps the university in the good graces of the taxpayer and the constituencies who are a little less strident in their condemnation of people whose jobs require the strict following of orders. What then is the best way forward?
Posted by Luke Fernandez at 9:46 PM