Digital Humanities in the University 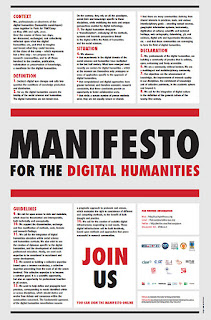 I've been regretting that my blog has such a pedestrian title, especially when I compare it to some of the other blogs I've been browsing like CogDogBlog or BavaTuesdays.  Unlike those mysterious titles, mine has little irony.  It doesn't prompt the reader to keep asking what it means.  And the phrase "I.T." can sound uninteresting.  The first vision that may come to mind is a bunch of mainframes and Cobol programmers wasting away in non-descript tan cubicles.  That stereotype, as it's witheringly pictured in the movie Office Space, or as I lived it while doing Y2K patching in the late 90s at Ashland Oil Company, is certainly a part of what I.T. is.  And I suspect those faculty I'm friends with who don't quite know what I do at work, think these images sum it up.

Fortunately, the culture of IT, in the university at least, isn't usually as corporate as that vision.  We have our share of practitioners who wear suits, and who wax excitedly about books like Who Moved My Cheese, or Seven Habits of Highly Successful People.  But the reality is that IT in the University is a lot more than all of that.

On this blog, for example, I've been trying to highlight the digital humanities which are very much a part of I.T. in the university.  A nice synopsis of what this IT initiative is can be found in a recent Chronicle article by Kathleen Fitzpatrick.  But the fast and short story is that the digital humanities are two things.  First, humanities scholars are increasingly using digital tools in their teaching and research.  Second, the frameworks and approaches that humanities scholars use offer incredibly insightful perspectives for making sense of what I.T. is, where it should go, and it's role in forwarding the missions of the university.

To forward those activities some universities have established digital humanities centers (a flagship one for example is George Mason's Center for History and New Media).  But even on campuses which don't have formal centers, it's easy to uncover how much they can serve (and be served) by university I.T.  I'll leave a comprehensive survey of these service roles for a later blog post.  But for now I want to list three digital humanities concerns that I came across last week while on my own campus.  They aren't necessarily the most powerful examples or most salient digital humanities initiatives on campus (I'm leaving out for example the whole range of activities that our media scholars do in English and Communications -- including but not limited to Michael Wutz's research on emerging 19th century media and Sheree Josephson's research on computer-human interaction).  But I draw attention to them simply to illustrate that digital humanities concerns are a pervasive and topical presence on campus even outside of the areas where one would ordinarily expect to find them.  (If you don't care about what's happening on my local campus you might skip the italicized stuff below):

1) On Tuesday I was working with some students who were about to read Henkin's fine history of the postal service in 19th century America.  To spark their curiosity I mentioned that many of the concerns that we have about emerging media now are echoed in 19th century Americans' reactions to changes in postal services.  For example, when the postcard first came out in the middle of the 19th century, Americans expressed worries not unlike those worries we now have about the abbreviated messaging that happens in texting and twittering.   We then dwelt on challenges of salutation (which were as much an issue in the postcard as they are in email), which in turn morphed into a discussion of the manner in which proliferating media are eroding traditional institutions of authority (the recent audience disturbance during Weber State's performance of Beethoven's 9th was mentioned as an example).  After class, a couple of students noted that it wouldn't be a bad idea to have some classes on netiquette.  A digital humanities center could do this and more, Rather than merely teach polite practices for the online world, it could lead us to examine how issues of authority, familiarity, cordiality, and social relations more generally take on new forms in the digital age.

2) On Thursday I met with two Weber State professors who recently published an anthology titled Science Fiction and Computing.  (I hope to post a transcription of that conversation here in a few weeks).  Like many anthologies, it covers a lot of ground.  But one thread that was particularly noteworthy was the insight that science fiction plays an important role in helping readers to sort through the moral challenges that past and present technologies have (and are) presenting us with.  While science fiction is sometimes seen as a form of techno-porn or technophilia, it actually also plays an important role in developing and evolving our understanding of IT.  It goes without saying that this too is a topical example of the digital humanities at work within our university.

3)  My spouse, who recently published Homesickness: An American History,  spent five years doing archival research to determine that the once popular sentiment of homesickness has given way to nostalgia.  Instead of indulging homesickness, the modern American economy celebrates nostalgia.  While the book is painstakingly researched, she was surprised when a reader used modern data analytics to corroborate her empirical research.  Using Google's Ngram viewer of the American library, the reader determined that indeed the use of homesickness has declined while the use of nostalgia has increased:

Of course there's a lot more to my wife's argument than is conveyed by a simple graph.  Analytics in and of itself isn't going to generate (or displace) the meaning and significance that is uncovered through archival work.  But as a complement to traditional humanities scholarship, these digital techniques certainly have a lot to offer.