Unpacking Code, Composition, and Privilege: What Role can Dilbert and the Digital Humanities Play?

I ordinarily wait a little longer between blog posts and try to write with a bit more polish but I wanted to jot down two questions that emerged after writing last week’s post on Code Versus Composition.  Hopefully I'll get to these concerns over the next couple of months:

In the Digital Humanities blogosphere and in books like Unlocking the Clubhouse: Woman In Computing there is much to learn about the way that coding culture may create and sustain groups of privilege. In turn, the methodologies of class, race and gender studies can help to lend insight into this culture.  Despite the fact that we like to think we live in a post-class, post-gender and post-racial society those categories aren't going away yet.  And until they do there's room for sequels to Unlocking the Clubhouse books.    Humanists, and digital humanists in particular, may be in a good position to use these methods of analysis since they've honed these methods in other disciplinary endeavors.


The question I have, however, is whether class, race and gender are the only lenses through which privilege and the distribution of power can be tracked.  While they are powerful tools do their methods generate attention blindness that obscure other forms of privilege? To this point there are very insightful technological theorists who haven't placed the triad of class, race and gender at the core of their analysis.  For example, Neil Postman's short address "Five Things We Need to Know About Technological Change" and his "second idea" in that essay provides a really useful way for uncovering how privilege (and deprivation) are realized during technological change:

" the advantages and disadvantages of new technologies are never distributed evenly among the population. This means that every new technology benefits some and harms others.....Who specifically benefits from the development of a new technology? Which groups, what type of person, what kind of industry will be favored? And, of course, which groups of people will thereby be harmed?"

While Postman's approach certainly prompts us to think about race, class and gender groups, it isn't constrained by it.  Other groups can also be considered.  For example, in our current N.E.H research my colleagues and I are examining how digital technology is shaping and reshaping cognition.  While it's certainly worthwhile to ask whether these changes privilege particular genders, classes or races, an equally salient question is whether it favors a type of person who is better able to multi-task.  In creating more and more digital distractions are coders generating the social conditions in which multi-taskers will prevail? And in my open source software advocacy work one should ask whether a particular form of coding collaborative work privileges groups with a particular political and economic ideology.  The same question applies to the study of growing global networks: are those networks privileging people who harbor sympathies to neo-liberalism and antipathies to more communitarian ideologies?

On a more humorous level, the Dilbert cartoons also illuminate.  But his lens, more often than not revolves around the tensions between technicians and managers: 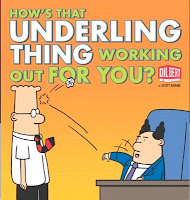 
Finally, while coding and the product of what coders produce is certainly subject to class, race and gender studies critique, and more largely the critique of Neil Postman, we shouldn't forget that coding, in creating privilege and division, can also often be a bridging activity that brings together and harmonizes cultures that conventionally are portrayed as at odds.  On our campus the College of Arts and Humanities and the College of Applied Sciences and Technology don't mix that much.  It's a division that is reminiscent of the one C.P. Snow popularized 50 years ago.  But coding doesn't have to be this way nor is it always this way now.  It can bring different cultures together. Speaking metaphorically, it's not always Code versus Composition but sometimes very much Code and Composition. That I think, is at least one hope of the Digital Humanities.  That hope shouldn't be forgotten even as we engage in class, race and gender critiques and it raises a concomitant question:   In recent years how much has this hope been satisfied and what more work needs to be done in order to have this hope fulfilled?
Posted by Luke Fernandez at 1:24 PM