Canvas Discussions; Chuck and Martin and the 80/20 Rule

Earlier this week, Instructure hosted their first international conference. I expected mostly Utah people but there were attendees from all over the U.S. including one person from a school in Toronto. In keeping with Postman's first rule of technological change I don't want to be an evangelist for any LMS but I will say that the conference did a good job of disarming me. The conference, in many ways reminded me of early Sakai conferences in Baltimore and Vancouver. There was real energy in the air and I left with a sense of belonging to a close knit community of users who are listening to each other. Whether Canvas can sustain this as it grows will be interesting. Josh Coates (Instructure's head honcho) alluded to this in a question and answer session when someone in the audience asked him, "What is your primary strategic focus in the next three years?" Josh responded that a year ago there were only seven employees in Instructure, that today there are 45 and that next year, at present rates of growth, there will be upwards of 140 (not to mention how many more schools there are likely to be using the product). Given those numbers Josh asked "How do you grow?" Hopefully, from our perspective, in a way where we still feel like we're still playing a role in determining our own technological destiny. 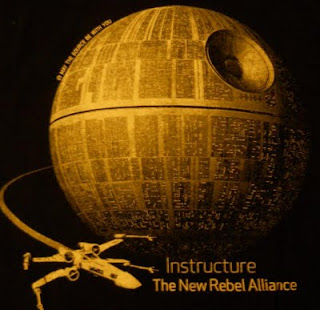 To that concern of controlling destiny, during the closing BBQ, I had a chance to talk with Brian Whitmer who cofounded the company with Devlin Daley during (or perhaps directly after) a grad stint at BYU. For the most part I've really liked teaching in Canvas but I did ask him whether there were any plans to supplement the way they've chosen to set up discussion boards with other more traditional approaches. Instructure chooses an option that Moodle calls "Display replies flat, with oldest first" whereas I prefer "Display replies in threaded form" or "Display replies in nested form." (The links, by the way, take you to a Moodle hosted discussion where participants are discussing the relative merits of Moodle versus Canvas.) We didn't talk long enough for me to

understand completely what Brian has found problematic in the nested and threaded forms, but I think he thinks that students often won't drill down as much as instructors would like them to -- which would mean that the potential advantages of nested and threaded approaches might not really pay out in practice. To keep this post short, I won't weigh the respective merits of these approaches except to speculate that there are enough users who like the traditional approach that it may merit including it as an option, even if Brian wants to keep the flat approach as the default. 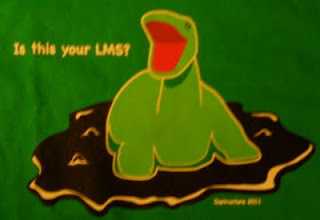 Certainly, this is the strategy Moodle has chosen. Since there is a division among users, rather than choosing just one, Moodle provides users with choice. Interestingly, there's a short video of Dr. Chuck (former Executive Director of Sakai) interviewing Martin precisely about this challenge. Here is the transcription:

Dr. Chuck (aka Charles Severance): Is there ever been a situation where the community has mildly revolted where you thought X and a whole bunch of people thought Y and they sort of ran away with it? Or have you been in front of it the whole time?

Martin Dougiamas: It's been pretty good....occasionally when something's been put in there as a pedagogical feature....what usually happens with this sort of stuff is we talk about it we decide there's two camps and so we create an option and people can make a choice but the default value for that choice is always mine. I always try to make Moodle out of the box behave like the way I want it to behave.

And if you want to see the speech in full check out the actual video at minute 2:30

As I recall from our conversation, Brian mentioned the 80/20 rule but when I pressed him on it, he wouldn't say definitively that 80 percent of users prefer the "Display replies flat, with newest last." This isn't to say that the Instructure guys haven't already given all of this a lot of thought (in a story that is rapidly becoming mythic Brian and Devlin toured the country in a car without air-conditioning gathering user requirements at a ton of schools before actually coding anything). So it's possible I'm wedded to an anachronistic outdated approach that isn't worth including because of the clutter it would cause. And in fact, Brian, does have a point. I may miss Moodle's approach but it's certainly not enough of a frustration that I'll stop using Canvas because of it. Still, I'm writing it here so it matters at least a little to me. What do other people think? With respect to this little microcosm of Canvas are there any refinements that could be made to discussions? If so what are they?
Posted by Luke Fernandez at 1:36 PM